If you?re a professional in 2019 chances are you?re one of the 612 million members on Linkedin, 10+ million of whom are in Australia. If you?re an accountant or a lawyer not only are most of your peers on the network, but so too are most of your prospects & clients. Opportunity is everywhere.

In fact, one of the most recognised business influencers in the world has just come out in support of Linkedin as a marketing platform, especially for B2B marketing, in a massive way.

2019 Is Going to be The Year of Linkedin

Gary Vaynerchuck, the Chairman of VaynerX and CEO of VaynerMedia, and followed by more than 2.7million Linkedin members, recently said:

?Go ?All In? on Linkedin as a B2B marketing strategy. 2019 is going to be the year of Linkedin.

Whether it?s through the written word, audio, or video, my biggest advice for you all is to publish an enormous amount of content on Linkedin every day.

This is especially true if you?re in the B2B space.

The organic reach on Linkedin is similar to what Facebook?s reach was several years ago. The ads are expensive because there?s a ?floor? on pricing, but there?s a massive opportunity with organic content right now on Linkedin?.

This is a guy that lives social media and for the last 5 or more years has been ahead of the curve on just about every social media trend. And he?s putting his effort where his mouth is. His Linkedin activity is off the charts.

Why Advisers Need to Pay Attention

For the most part accountants and lawyers sell their intellectual property. The problem with that is IP is intangible and short of actually doing the work the best way to make your knowledge and expertise tangible is through the publishing of content, specifically content which demonstrates your understanding of the problem and mastery of the solution.

Not only that, you need to get eyes on your content and ensure it is consumed by those who not only have the problem you solve, but are also in a position to make a decision to purchase.

Before we go too much further it might be useful to get some statistics on the platform. So let?s do Linkedin by the numbers:

But Why Is Now the Time To Go ?All In? On Linkedin?

The statistics are very interesting, and whilst it is clear Linkedin is accelerating its growth trajectory the numbers on the platform are a long way short of the 2 billion users on Facebook. Why is now the time to go ?all in? on Linkedin?

One of the reasons Gary V gives us for his prediction is the organic reach of the platform. Let?s explore that.

1. Linkedin has a perfect Moz domain authority of 100

Linkedin has a perfect Moz domain authority of 100 which means Google loves them. What that means for you as an adviser is that whenever you publish an article on Linkedin it will be indexed and show up in Google searches. That?s more reach, impact and traffic to your website.

If you want to consistently put yourself in front of decision makers then Linkedin is where it?s at. When executives and decision makers were asked where they go to find professionally relevant content 91% of respondents said Linkedin. With Twitter at 29% and Facebook at 27%, the results weren?t even close.

This is the most astonishing number in this article and what it means for advisers is ?Opportunity?.

As an adviser you must be both relevant and visible to your market. Thought leadership through the publishing of educational content is a key strategy.

4. Linkedin makes up more than 50% of all social traffic to B2B websites

With businesses putting so much effort into its activities on social media it makes sense to put significant resources behind activity on Linkedin. Not only is the organic reach of Linkedin exceptional its ability to drive traffic back to your site is unmatched. 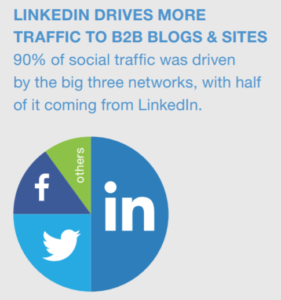 5. Over 80% of leads generated through social media come from Linkedin

This is definitely one of the most compelling reasons, from a lead generation perspective, for you to invest time and resources into Linkedin. More than 4 out of every 5 leads being generated from social media are coming from the Linkedin platform.

Linkedin Is The Perfect Vehicle To Build Brand

If you?ve read this far then it should be clear that any strategy to grow your practice will be incomplete without Linkedin in the mix. It really is the perfect vehicle to build your brand.

The question is whose brand is Linkedin perfectly positioned to build, your personal brand or the corporate brand?

The answer to that question is both. In fact I see the key to the effective leveraging of Linkedin as a client acquisition tool as being the building of corporate brand through the establishment of the personal brands of those who work in the business. Let me explain.

Linkedin is not really a marketing tool in the conventional sense, though it can be used very effectively to generate business. It was designed as a medium for professionals to network for the purpose of advancing their careers. That?s the DNA of Linkedin. The platform was crafted to establish & nurture professional relationships.

So the key to harnessing the potential of Linkedin lives with the individuals in a business, not principally with the business itself. Statistics produced by IBM found leads generated by employees through social media activities are 7 times more likely to convert than other leads. That?s because people trust other people more than they do companies.

Invest in your team. Help them build their personal brands using platforms like Linkedin. Leverage the relationships and the trust they build with their markets to bring more and better quality work into the firm.

Opportunity is everywhere, but the time is now.

As with any innovation, new piece of technology, market or product, it has a useful life cycle. As has been the case with Facebook, the market matures, the late majority come on board and the advantage diminishes.

But if you?re an accountant or lawyer who wants to build profile through your brand, attract more clients and accelerate the growth of your practice then Linkedin must be part of your strategy.

The organic reach you?ll achieve will be greater than anything you, or your firm, will be able to achieve through its own means. The ability to consistently be in front of the decision makers in your space are unparalleled.

The only decision you need to make is to commit to Linkedin now, and get busy building relationships.

What This Famous Business Influencer Just Said About Linkedin

Have further questions? Get in touch today!